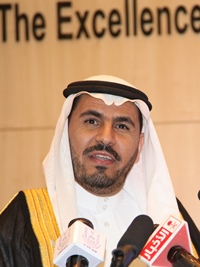 Professor Al-Zahrani has 20 years experience in catalytic reaction engineering research and Polymers including Directorship of SABIC Catalytic reaction engineering lab. His expertise includes Catalysis for petrochemical industries, Polymer synthesis and processing separation processes and supercritical fluid reaction and separation systems etc. He has published over 170 ISI papers in chemical engineering field in reputed journals and  22 Patents and 4 books. He is currently Director of the SABIC Center of Excellence in Polymer Engineering at KSU. He is acting as consultant for several petrochemical industries in Saudi Arabia. He is supervising 3 research groups’ related Chemical Engineering fields. He is involved on multi research projects with local petrochemical industry International Centers and Universities.  He is serving as a board member of Prince Sultan University – Riyadh and Member of Board of research advisory council for PETRONAS Technological University- Malaysia.  He is a board member for the international advisory council at KSU. He has been selected as the First National Model and awarded with the STC Prize for the year 2013 on the national day of Saudi Arabia.